Why I Write – Lawrence Parlier

Why I Write – Lawrence Parlier

I’m always inspired by how other writers find their way. I asked my friend and colleague, Lawrence Parlier, to share his story with me. Lawrence’s debut novel, Sierra Court Blues, was published in 2013. Read my review here. 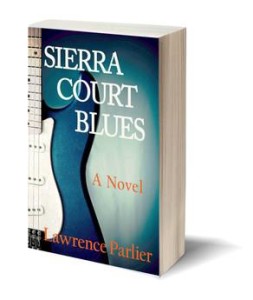 (Or the unintended consequence of loquaciousness)

I’ve always been a storyteller.

Over the years, and especially leading up to the release of my first book, I heard a lot from my family about the wild stories I told as a child, tales of monsters and mayhem, alien starships and knights on invisible horses.

“Your imagination was so vivid,” a great aunt once said, “We were never sure what would come out of your little mouth next.” Luckily, my family encouraged this. They let my imagination run free and there was always a friendly ear willing to listen.

But, as I started kindergarten I quickly learned that taking a break to tell a tall tale was not part of the school day agenda. I learned to internalize what was once allowed to flow freely. I lost a lot of myself then because I had yet to learn how to write.

A few years later, as my education progressed, I was given a life changing assignment. I was told to write and illustrate my own book. The details of the assignment have faded from memory now, but I remember that my book “Vampires from Space” didn’t exactly conform to the given rules. Still I received an A, which I think was due to my originality and apparent hard work on the project. I remember now how excited I was about the project and how I had many more stories that I wanted to capture in the same manner.

It was a beginning.

At the same time I became a voracious reader, a hobby my parents were also pleased to encourage. Both of my parents were avid readers so spending time exploring the library and reading and discussing books became a fun family activity.

Learning to examine and question what I’d read from an early age was an invaluable skill, one that has served me well. At that age I had never given serious thought to writing as a trade. It was just an outlet to channel my loquaciousness, but, subconsciously, the tools were being developed.

It was later, in junior high, when writing became a passion, especially song lyrics and poetry. This developed in conjunction with my love of music. My goal was to become a musician. And, to have any measure of success at that, I discovered that you had to be able to write your own songs. That was my point of entry.

As I poured through the music at the time, in the mid-80’s, I found that a lot of the lyrical content in most of what I was listening to fell flat. I started searching for something that satisfied on a deeper level. That was when I discovered Iron Maiden, Rush, and The Doors.

In these bands, I discovered lyrics that were intelligent and powerful. As I studied their lyrics and started chasing down their influences I found myself immersed in Samuel Coleridge Taylor, Alfred- Lord Tennyson, Arthur Rimbaud, Jack Kerouac, Phillip K. Dick and Robert Heinlein.

As I began to read and study these influences the whole of literature opened up to me in a firestorm that my school work had failed to ignite. I learned more about literature from reading Jim Morrison’s biography than in any English class I had attended. This discovery fed my rebellion while shattering my tenuous faith in institutions of learning. School, then, just became a great place to hang out in and pick up girls.

Throughout high school and into early adulthood I read everything I could get my hands on while investing my passion into developing my songwriting. I played in various bands throughout this time and quickly found recognition for these skills. I spent a few years out on the road seeking fame and fortune after an early failed marriage, but never managed to bring a band up to that next level. That failure has been a hard lesson to accept, but one I apparently needed to learn.

So, I came home from the road, bitter, with a chip on my shoulder and other issues that cling to musicians in working bands. I drifted for a long time both in my mind and in the world. I refused to pick up a guitar. I refused to write. They only served to remind me of my failure and I shunned them for years. I found a career I could stomach and hid from the better part of my nature.

Eventually, slowly, I returned to both. I started playing in some local bands as a way to get out and explore. One night, after a gig in a tiny out of the way bar, I found myself telling stories of my days on the road  to a growing group of people as the bar wound down to closing. One of them, a shapely cousin of one of the band members looked at me and said, “You need to write all of this down. People would pay good money to hear this stuff.”

It didn’t immediately cause me to set pen to paper, but it did get me thinking. Maybe I should get back into writing. Maybe it would help exorcise some of my demons if I could write about some of these experiences. I had already had some small successes publishing poetry. Maybe now was the time to think about graduating to longer forms.

I knew that it wouldn’t be easy. Nothing worthwhile ever is, but, after a lot of thought and soul searching I decided that it was worth the effort. It was an aspect of my personality that I had forgotten and needed to reclaim.

I bought books on how to write and then later took a class. I was 35 years old. I had a wife, kids, a full time job, and a band. But, I chased my writing with a fervor that I hadn’t felt in years.

Then, as my skills and confidence grew I started writing about the experiences in bands that I had been telling my friends about for so long. After more than a few years of stops and starts, moments of self-doubt and multi-chaptered nights of mania, I completed my first novel Sierra Court Blues.

To my great surprise, I secured a publisher less than a year after it was finished to debut in the late fall of 2013.

It has been a long and twisted path that has led me to where I am today. I still work ardently to improve my writing and I hope that my dedication to my craft shines through in my work.