Home / New Fiction  / What Is Found, What Is Lost – Chapter Three 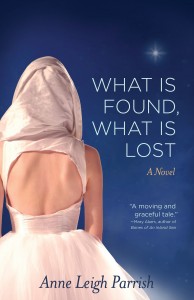 Just released from She Writes Press

(Go back to Chapter One and Chapter Two)

Ken had promised to be on his best behavior. Holly and her husband, Jack, were coming over for drinks. They were visiting from Minnesota, where they’d lived for three years. Freddie had offered to put them up, but Holly wouldn’t hear of it. Neither would Ken, though Freddie kept that to herself. Ken found Jack a little full of himself, too much of a social climber. Freddie agreed. One of the things that attracted Jack to Holly was the elegance she’d cultivated for years. She dressed well. She read difficult books. She took adult education courses in things like Reading the Ancient Greeksand the Art of the High Renaissance. Freddie knew that Ken thought her snooty. He didn’t understand her need to compensate for the past.

Freddie cleaned the house. Ken complained that he couldn’t hear the ball game over the sound of the vacuum cleaner. He told her she looked dumb with curlers in her hair. She told him he looked like a brute, sitting around in T-shirt with a can of beer in his hand. He laughed. Lorraine’s visit was three years before. Freddie hadn’t quite stopped fearing another.

Ken was getting used to the idea. The guys at the precinct had slapped him on the back. The dispatcher who was in love with him went to the bathroom and cried at the news. She confessed to him that she prayed every night that Ken would leave Freddie. Ken was flattered, but didn’t return her affection. Freddie knew about her and pretended not to. She was good at looking right at a truth, and ignoring it.

Holly was thinner than before. She remarked at once on Freddie’s plumpness. Freddie had no choice but to say why.

“I thought you swore you’d never have any kids,” Holly said. Her color was high, as if the news had upset her, which Freddie assumed it did, because it made them both think of Lorraine.

“Divine intervention,” Jack said. Whereas Holly was thin, Jack was on the heavy side. When he sat down, the buttons on his shirt strained and made small gaps between them.

“Not likely,” Freddie said, and Holly laughed. Freddie was suddenly embarrassed. She didn’t like being the center of attention. She brought out a tray of cheese and crackers. Ken mixed a pitcher of martinis, and poured four drinks. The one he gave Freddie was smaller than the others.

“You need to watch it now,” he told her.

The conversation took the usual turn. Did she want a boy or a girl? Would they make a nursery out of the spare room? Did she have a good obstetrician? Had they talked about names?

“God, you haven’t heard from her again, have you?” Holly asked. Freddie shook her head. The elegant wave she’d tried to produce with the curlers had fallen flat, and her hair, recently shortened , wiggled unpleasantly.

Jack said he wasn’t one to ever speak against a family member, but from everything he’d heard, Holly’s mother was something else. Ken snorted. The story of her visit, which Freddie had shared with Holly in a series of phone calls, was repeated for Jack’s benefit.

“You can’t blame her for not coming clean right away. I mean, sheesh! Who wants to own up to a nightmare like that?” Jack asked. He leaned forward and helped himself to the nut bowl on the coffee table, further straining the fabric of his shirt.

“A nightmare I thought I’d never have again,” Freddie said.

“And thank God for that. I don’t think I could have handled Swinn, too.”

“I’ll refill this plate,” Freddie said and went into the kitchen. Jack prompted Holly to continue. She hesitated. It was a tale that needed careful telling.

Swinn was their mother’s spiritual advisor, for want of a better term, Holly said. He ran the Baptist camp in Ohio, where she and Freddie spent time as children. He was a very committed person. Freddie was eavesdropping, and when Holly described Swinn that way, she poured herself another martini from the sweating pitcher on the counter. Years later, she would wonder whether getting drunk that day had had any lasting effects on Beth. Sometimes she even thought Beth’s need for stimulation had stemmed from the gin that had flowed through her blood on that very odd and disturbing afternoon.

Holly had moved on to something else—buying a new car—when Freddie finally reappeared. All three looked at her. Ken took the tray out of her hands. She wasn’t carrying it very well. Several crackers had fallen to the floor.

“Looks like the martinis kept you company out there,” he said.

“Aren’t you supposed to be careful with alcohol?” Holly asked.

“Nonsense. My mother drank a glass of beer every day when she was pregnant with me. Doctor’s orders,” Jack said.

Freddie sat down. Holly handed her a couple of crackers and told her to eat them.

The men went into the kitchen so Ken could mix up more martinis, and Jack could steal a smoke out back. Ken said he didn’t have to—he could enjoy his cigarette in the kitchen like a normal person. Jack said he wanted to spare Holly, who had just quit and was trying not to relapse.

Freddie chewed her crackers. She wondered where the cheese was, then realized she hadn’t added any to the tray while in the kitchen.

“I went by the old house,” Holly said.

“I drove past Banner’s place, too. He was pushing a lawnmower around. And he’s no spring chicken. Gotta be in his eighties now, at least.”

Holly nibbled on a cracker and brushed the crumbs daintily from her lap.

“But what if he did? He’d recognize you for sure,” Freddie said.

Then Lorraine would show up again, demanding information. And if she came now, in the next few months, she’d see that Freddie was pregnant.

“She’ll find out about the baby and make my life hell.”

“No, she won’t. Remember, you’re stronger than she is. You kicked her out once. It wouldn’t be so hard to do it again.”

The sound of laughter came from the kitchen. Freddie couldn’t tell how long they’d been out there. It was fall. A fresh breeze wafted in, along with the smell of cigarette smoke. Farther off was a smell of burning leaves. Halloween was only a few weeks away. Ken was saying something she couldn’t make out. He was jolly for a change. Maybe he was talking about work. From a distance, out of the patrol car and away from the speeders, drunks, bashers, and abusers he dealt with every day, the events that made up his working life took on a comic tone.

Ken and Jack returned with a fresh pitcher of martinis and clean glasses.

“I hope you know I was just kidding about the baby’s name,” Ken told Freddie.

“It’s fine.” Jack took his place next to Holly. Freddie stared into space. Then she poured herself another drink. Ken took the glass out of her hand and put in on the floor by his chair.

“Let’s do something to lighten the mood,” Holly said.

“Tell them,” Freddie said to Holly.

“I met her, remember? Had so much booze in her, she could’ve floated away.”

“What it was like living with her,” Freddie said.

“They don’t care about that,” Holly said.

“From what I hear, she had the maternal instincts of an alligator,” Ken said.

“Let’s just say she had other priorities,” Holly said.

Holly sipped her drink. She smoothed down the front of her dress. Her hands were strong, like Freddie’s, but her nails were manicured, well cared for.

Lorraine was a woman full of fire, she told him. Deeply passionate, with no concern for personal appearance. She dressed badly, never minded looking ragged.

“I took her for a homeless person,” Ken said.

“Which is why I probably work so hard to look good,” Holly said. The men laughed.

Holly continued. Lorraine may have been cold as a mother, but people sought her guidance all the time, because she was so single-minded. God was the answer to everything. Prayer was always the solution. Holly could remember lots of despair in that camp that Lorraine lifted with her energy.

She had peculiar notions about death. Holly always found that strange.

Lorraine followed the Christian doctrine of eternal life after death, Holly explained, but she also believed that death was only experienced by other people, never by oneself.

“It was her one attempt at science. She said that one could never be aware of the moment of one’s own death. You were just there one minute, then not there the next, so you never knew you were dead, or had died. Only the world knew. Death was held outside yourself,” Holly said.

“Okay, well, maybe I misspoke. I should have said her one attempt at some other sort of rationality that didn’t stem from religion.”

Freddie didn’t remember her mother ever talking in those terms, but then she had been different with Holly, and might very well have shared that with only her.

“She talked to the dead,” Freddie said, and pulled quickly at her clumpy hair.

“What do you mean?” Holly asked.

“There was someone she was always talking to late at night.”

“No. She was talking to someone named Miss Dormand.”

“Things like, ‘Tell me what to do, Miss Dormand. You’re there now, on the other side.’”

“She used those words, ‘the other side?’” Jack asked.

Jack scratched his meaty head. His forehead glistened with sweat. “I had an aunt who liked to contact the spirits. You know, séances and all that,” he said.

Holly signaled Jack to drop the subject. Freddie felt pretty glum again, and it must have showed. Jack talked instead about the house they’d just bought in Minneapolis. All the pipes had to be replaced. The plumber made more in a year than Jack did, he was sure, and Ken agreed that it was likely. Gradually Freddie’s silence thawed, and she said it must be awful to live without running water. But that only made her remember Swinn’s camp, and her mood suffered once more. Though Lorraine was still alive, her power to haunt was as strong as any ghost’s.