This article originally appeared in the Spring 2013 issue of the Yeah Write Review.  A copy of the Review may be purchased here. 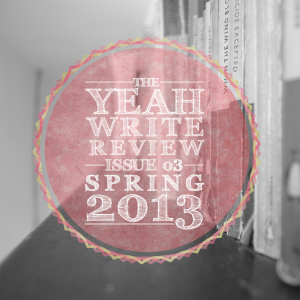 Narrating emotion means making your reader see what a character is feeling without explicitly stating it.  If you tell the reader what’s going on, she’s just observing the story, not participating in it. She won’t have any stake in the outcome if you say everything there is to know. Readers need an “ah-ha!” moment, where they’re made to feel that they’re figuring things out by themselves. Writing is a collaboration with readers, where the writer throws out clues, and the reader draws conclusions from those clues.

So, if Margaret is sad, don’t write “Margaret was sad.” Instead, find a way to make Margaret’s state of mind clear through how she’s behaving, what she might be thinking or remembering, or even how another character echoes or underscores something she’s worried about. Maybe Margaret sighs a lot, looks down at the ground, or chews her fingernails. She might remember a picnic by the lake with her family. Everyone is smiling and laughing. If the reader knows that someone in Margaret’s life has died, a parent, perhaps, this memory tells the reader that Margaret is grieving. Someone close to her can be extra kind, offering her a cup of tea, putting a gentle around her shoulder. That, too, shows the reader through another character, what Margaret is feeling without telling us in so many words.

With this is mind, consider a master of the short story, Raymond Carver.

In “Are These Actual Miles?” from Where I’m Calling From, Selected Stories, Vintage Books, 1989), a couple facing bankruptcy needs to sell their car. The wife agrees to make the sale. The husband, Leo, stays home alone. He pours himself a drink. Carver doesn’t tell the reader what Leo is feeling. What he says is:

His undershirt is wet; he can feel the sweat rolling from his underarms. He sits on the step with the empty glass in his hand and watches the shadows fill up the yard. He stretches, wipes his face. He listens to the traffic on the highway and considers whether he should go to the basement, stand on the utility sink, and hang himself with his belt. He understands he is willing to be dead.

It’s clear that Leo has put a brave face on his financial troubles, and is in fact so miserable that the idea of suicide takes on a shade of plausibility. The bad short-hand version of this scene in lesser hands would go something like this:

Leo was upset. He wondered where his wife was. He felt really bad and thought about killing himself.

Carver’s version is so much more powerful, because it drops the reader right inside Leo’s head. The reader becomes, for a few moments, that same man facing ruin and despair. The feeling is strong, disturbing, even raw.

More hours go by. Finally, the wife climbs the porch stairs at dawn. Leo gets up off the couch:

He opens the door. She bumps the wall coming in. She grins. Her face is puffy, as if she’s been sleeping under sedation. She works her lips, ducks heavily and sways as he cocks his fist.

“Go ahead,” she says thickly. She stands there swaying. Then she makes a noise and lunges, catches his shirt, tears it down the front. “Bankrupt!” she screams. She twists loose, grabs and tears his undershirt at the neck. “You son of a bitch,” she says, clawing.

The reader knows from this painful moment that the wife is not at all pleased with the successful outcome of selling the car, even though she made it a point to sound cheerful on the phone. The reader also knows that she’s been hit before, because she ducks.

A lesser writer might have the wife say something like, “This is all your fault.” After Carver shows the reader how the wife experiences that moment, we know she thinks it’s his fault, and has for a long time. A whole layer of their relationship is revealed here and gives the reader a context for the bankruptcy they face. It’s crystal clear that money is not the full extent of their woes by any means. Both husband and wife – and their marriage – have grown more complex with this understanding. They become real people, not sketches of real people, and that’s crucial. Fiction makes people real in the minds of readers.

Another way to narrate emotion is through the use of memory. It’s not just what a character remembers, but the seamless act of remembering. That might sound complicated, but it’s really not. Think about how you remember something. It’s rarely a step by step process, but an entire scene that comes back, all at once, without you willing it to. It’s just there. Memories can be powerful things, and a fictional character coming face to face with her own, suddenly, makes for a powerful moment in a story.

In the title story of William Trevor’s marvelous collection, After Rain (1997, Penguin Publishing), Harriett is on her own in Italy after breaking up with her lover. Seeking comfort, she returns to a pensione she visited as a child. Her thoughts are detached, focused on memories of her parents instead of her lover, until Trevor lifts the veil:

She folds her napkin and tucks it away, and for a moment as she does so the man she has come here to forget pushes through another crowded room, coming towards her in the King of Poland, her name on his lips. “I love you, Harriet,” he whispers beneath the noise around them. Her eyes close when their caress is shared. “My darling Harriett,” he says.

Bam! The reader as bowled over by this as Harriet must be; you can almost see her fighting back tears. A writer without Trevor’s talent would just say, Harriet missed him. She remembered him that night at the King of Poland. She wished she were there again, right now. Instead Trevor has transported Harriett – and the reader – seamlessly into the past, and packed a huge emotional punch at the same time. The reader feels Harriett’s pain, as it were, and that makes Harriett real on the page. She’s not just some woman who got dumped. She’s someone you might know, someone who might actually be a lot like you. You can feel sorry for her. Empathy with a character makes you care about what happens to her. Trevor has got you on the hook, which is where you need to be when reading fiction.

You can also narrate emotion by using another character. In “The Colt,” from his Collected Stories, Wallace Stegner gives us a young boy who forms an attachment to a crippled young colt. It’s front legs are bent, and it can’t walk properly.  The boy doesn’t know what this means for the colt, that its survival is threatened. But his mother knows, and her reaction to the colt’s condition narrates the boy’s mounting apprehension:

Then Bruce saw his mother’s face. It was quiet, too quiet. She hadn’t answered a word to all his jabber.

The mother examines the colt, and forms her own, dire conclusion:

Bruce’s mother pressed her lips together, shaking her head. She moved so gently that she got her hand on the colt’s poll, and he bobbed against the pleasant scratching. “You poor broken-legged thing,” she said with tears in her eyes. “You poor little friendly ruined thing!”

Stegner makes it clear from his descriptions of Bruce’s mother that she’s not a woman who cries easily, and seeing her cry now – or prepare to cry – unnerves Bruce. The reader then knows from Bruce’s increasingly desperate pleas to rehabilitate the colt that it’s hopeless, although Bruce doesn’t yet know it himself. The reader is anxious on Bruce’s behalf. Once again, the reader is hooked.

Bruce’s father agrees to put braces on the colt’s front legs in the hope that the legs will mend and be normal again, and Bruce tends the colt with great devotion. Then the time comes for the family to make its annual summer trip by wagon to a remote homestead. The colt still can’t walk, and so can’t come with them. Bruce pleads, but no way can be found. A local farm-hand agrees to buy the colt and care for him until Bruce returns. This is the same man who said the colt should be put down, and while Bruce is worried about leaving the colt in his care, he has no choice but to agree.

The colt’s fate becomes clear on the way out of town a few days later. The family’s wagon passes the dump before heading into open country. A terrible stench rises up. The father sees where its coming from and urges the horses to pull faster. Then the mother becomes curious.

Bruce saw her lips go flat over her teeth, and a look on her face like the woman he had seen in the traveling dentist’s chair, when the dentist dug a living nerve out of her tooth . . .”

See how Stegner is narrating not only the mother’s emotion, but Bruce’s as well? Bruce knows his mother is very, very upset, and this in turn causes him fear. Bruce sees the dead body of the colt and screams for his family to stop.

His father drove grimly ahead, not turning, not speaking, and his mother shook her head without looking around. The truth comes out when the father grumbles, “For Christ sakes, I thought he was going to take it out of town.”

Now Stegner is narrating not just fear and grief on Bruce’s part, but betrayal. The weight of these feelings is never stated, only shown by how Bruce buries himself in the coats and blankets in the back of the wagon.

So narrating emotion means that you, the author, have to convey what’s going on inside your character by letting the reader experience for herself what that character is feeling. This means getting inside the character, putting yourself in his shoes, as it were, and then imparting what you find there to someone else.