One World to Another – Thoughts on Artistic Media

Home / Musings  / One World to Another – Thoughts on Artistic Media

One World to Another – Thoughts on Artistic Media 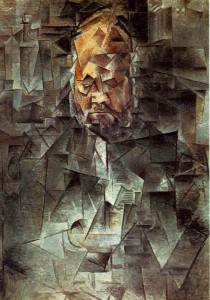 I have always loved Cubism.  Picasso and Braque, the master, the founders, if you will.  I always loved the idea of breaking things down to essential elements, and recombining them into new images.  Last night I watched a documentary called “Picasso and Braque Go To The Movies.”    It connected the images of early film with those found on the canvases of both artists.  I’d never suspected that connection before – never considered it.   I’d seen lots of early movies, silent movies, and have long been drawn to those, too.  Modern day artists weigh in on the exact nature of that influence – the pale, bled out colors, for instance, strongly resemble the tint of early film.  In film, images move, by definition, and in cubist art there is a sense of movement caught, if you will, in the moment.   The  documentary is narrated by Martin Scorsese, who knows quite a lot about movies and movie-making.   He takes the idea of one medium influencing another one more step by explaining a scene in ” The Departed,” where the character played by Matt Damon, the cop in the pay of the Irish Mafia, is about to murdered by Mark Wahlberg, in retaliation for the death of an informant.  Scorsese refers to a moment in the book on which the movie is based where the text reads, “And then something strange happened.”  How to convey those words into moving images?  By changing perspective, camera angel, and forcusing on a rat running along the rail of an outdoor balconey.   I was gratified, as a writer, to know that movie-makers struggle with my medium after learning that Susan Sontag had said years before (and I paraphrase here) that the movies have all the advantages over text for creating moments and moods.   How many times have I wished I could film my character reacting to a statement made by someone else – a shrug, a wince, a wry smile – that would say everything about what’s being thought and felt.  Artists occupy their own worlds, it’s true.  Being able to walk from one to another makes all those worlds richer.