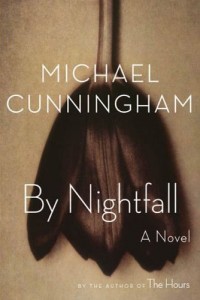 I read Michael Cunningham’s novel, By Nightfall, not long ago.  I didn’t find it as strong as The Hours, but then I don’t know how he could possible do better than he did there.  That said, By Nightfall has some amazing elements that stayed with me.  The narrator, Peter Harris, is an art dealer.  Cunningham gives us such rich detail about that world and what goes on in it – something I both admire and respect when I think of the research involved.   Peter Harris over-analyzes everything, he’s obsessed with how people react to him, he finds meaning in small gestures and inflections that may, or may not, convey something deeper.  The character of Peter’s wife, Rebecca, is much less revealed, and while I found this a possible flaw, I realized by the novel’s end that this is precisely what Cunningham intended.  Peter is so narcissitic and self-absorved that he’s missed the key fact that his wife is also unhappy, to the point of considering divorce.