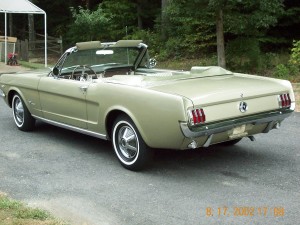 How funny it is to suddenly remember someone you’ve not thought of for decades!  There I was, having dinner in front of the television (a nightly affair), when someone I worked with back in the Seventies crossed my mind.  Her name was Virginia Farrell.  We worked in the lingerie department of a small clothing store on Palmer Square, in the heart of Princeton, New Jersey.  Even back then, this place screamed “old school.”  We sold boxes and boxes of stockings – not pantyhose; girdles; garter belts; and that all but vanished species – slips.  We were not allowed to wear pants.  Make-up was to be minimal.  We all obeyed these directives except for a fellow clerk, Eleanor, whose husband owned a very successful antiques shop.  For Eleanor, the job was something to pass time, more interesting than sitting home, watching soap operas, so she did what she pleased, which amounted to wearing sky blue eye shadow that made our manager quietly cringe.

Virginia dressed plainly, and was herself a very plain person.  She had thin lips that gave her a dour, Yankee expression, when in fact she had an off-beat sense of humor, particularly about the customers.  Women who insisted on buying their under garments a size too small always earned a choice remark, after they’d gone on their way, of course.  Virginia’s favorite expression was to say “Just like Crisco, that one.  Fat in the can.”  She was in her sixties, and lived with her very old mother.  This was out of financial necessity, not a deep family bond.  I gathered that they didn’t get along all that well, and kept out of each other’s way, which couldn’t have been easy, since they lived in the a tiny apartment in the Township’s newly constructed low-income housing.  She took pains to style her gray hair in a flip that would have been popular a good ten years earlier.  Her nails were nicely kept.  She used clear polish.  She wore bifocals that gave her a touch of wisdom, which she’d have had anyway, though her wisdom wasn’t from many diverse life experiences, but from a stubborn, perhaps unexamined faith not just in God but in the idea of ultimate gratification.

“The time when all things are made clear” was how she described death.  She was certain that what she didn’t understand would reveal itself at the point when she could no longer do anything about it.  Being seventeen, this struck me as stupid.  What was the point of knowing something if you couldn’t somehow turn it to your advantage?  Her answer was something along the lines of “Art of art’s sake,” only she probably said “Knowledge for the sake of knowledge.”  These quirky exchanges took place on slow afternoons, usually when it rained, and we stood idly by the large pane glass windows overlooking the Square and the centuries old Nassau Inn.

She wanted to write a book when she retired, a novel entitled If I Knew Then What I Know Now.  She felt as if she’d learned a great deal just by being alive.  Again, because I was so young, the idea of learning anything that someone else didn’t teach you directly or which didn’t come out of a book simply didn’t exist.

She was determined to move to Nashua, New Hampshire, where she would put pen to paper.  She had done her research – Nashua was a nice, decent place to live, though the winters would be a lot harsher than they were in central New Jersey.  And it was less expensive, which I suspect was the main reason she wanted to move.  She drove an old Ford Mustang, one of their earlier models, actually, which long ago had lost its status as a racy car, given how banged up it was.  But, it was a convertible, and I imagined her and her ancient mother, cruising north on the interstate, the back full of their modest belongings.

I don’t know if she ever got there, or if she ended up retiring in Princeton.  I left the following year for Colorado to live a very bizarre life for a couple of years before starting college.  That I eventually became a writer might have surprised Virginia, since I had no interest in that during the days we worked together.  Or, from her celestial vantage point, it might come as no surprise at all, but one of a great number of truths revealed as she breathed her last.