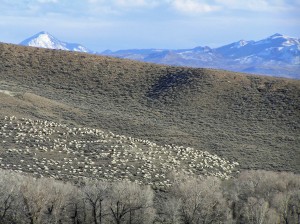 Before she was my landlady, Velma Wiley was my co-worker.  We were housekeepers in a retirement home.  I was nineteen.  Velma was in her sixties.  Although there were six of us on staff, I was usually paired with her, because the steady stream of chatter she kept up drove the other housekeepers nuts.  There was a lot of eye-rolling in the break room when she got going.  In fact, those women never hid their opinion that she was stupid.  To be honest, her level of attachment to the world seemed to be on the most basic level.  What would she make for dinner?  Would it start to rain while she waited for the bus?  Would the neighbor’s cat come around again, wanting to be fed?  Politics escaped her.  The only national news event that caught her eye was the death of Elvis Presley.  The Jonestown massacre didn’t register at all.  She had no idea who Squeaky Fromme was, or why she took at shot at President Ford.

Velma owned a small house in Boulder, Colorado.  She lived in the basement apartment.  Above her were two more apartments.  One had a magnificent view of the Flatirons, which became our home over the summer of 1979.  I was in college then, living a new life as a student.  My husband, John, would enroll that fall.  Velma seemed happy to have a couple of “youngsters” in the place.  Our neighbor – her other tenant – was Betty Layman, 26, studying hotel management at CU.  While Betty kept her distance, and didn’t accept Velma’s initiations to drop by anytime, John and I paid her several brief visits during which she rambled about her life in a way she never had at work, proof that she did actually know how to filter her monologs.

Over thirty years later, what stands out from those small moments?  She had a canary named Tweetie.  An entire wood-paneled wall had black and white photographs of a huge extended family, most of whom were long dead.  One man, dressed in the style of the 1910’s with round glasses and crossed eyes was identified as Cousin Ewart, to which Velma added, “but everyone called him Warty.”  She grew up on a sheep ranch in Wyoming.  A young niece died at the age of two when she tumbled into a vat of boiling dip – some disinfectant, I assumed.  Colorado and Wyoming were the only two states Velma had ever been in.  Even something as bland as Kansas had an air of exotic mystery for her.  That I was from the east coast was incomprehensible.

She used strange, colorful phrases when surprised.  “Well, I’ll be a son of a sea cook,” she said when told that the night before a drunken young man had plowed his car into the foundation of her house, roaring across her barren lawn, missing the only tree there, and coming to a loud stop in a twelve-foot space between our front steps and Betty’s identical set.  The sound woke us and Betty instantly.  Velma, and her brother and sister-in-law visiting from Wyoming (where else?) said they had heard nothing.

When the bottom of our water heater rusted out, and sent forty gallons of water through the panels of her drop ceiling and kitchen light fixture below, she said “Well, I’m as poor as Job’s turkey!” as she sashayed about with a string mop.  Velma was built like a soup can, but she was pretty light on her feet.

Another favorite was “That’s enough to gag a maggot,” reserved for anything disgusting she came across, like the remains of several crickets our cat had vomited up, not knowing they wouldn’t sit well.  In private, John and I speculated, giddily, what a gagging maggot might look like.

Velma played the piano, and sang along.  “Beautiful Dreamer,” and “Amazing Grace” were her favorites.  She played right after dinner, while we were trying to watch the news on our ancient black and white television set – a relic from the 1950’s, given to us by one of the residents of the nursing home who declared that it was bad for her eyes.  The picture slanted at a 45 degree angle, putting a painful crimp in the neck, and yet somehow aligning with Velma’s out-of-key howls.

Nothing ever seemed to make her sad or angry.  Even when she developed liver cancer, her spirits held firm.  The chemo was rough going at times, and I brought her my homemade carrot soup because I thought it might be easy on the stomach.  It was.  She asked for the recipe, then confessed that she didn’t really feel up to making it.

She never spoke of her husband who had left her years before.  She seldom mentioned her daughter, except to say the she had married a “bad character.”  She got hit by a car in the parking lot of a grocery store, and though her injuries weren’t severe, she missed almost a month of work without pay.  She didn’t complain about money, though she had very little.  I asked her once why so many bad things had happened to her.  “Just lucky, I guess,” was her answer.

We left Colorado in 1982 for Seattle.  I never saw Velma again.  Several years later, I asked a friend who was visiting Boulder to look her up.  He said her name wasn’t listed in the telephone book, which meant she’d probably succumbed to cancer by then.  I can’t begin to say if she had a good life, but from all appearances, it was a happy life.  Given her circumstances, her constant positive attitude was astounding, and also inspiring.  There have been a number of times over the years when I wished I could be more like her!