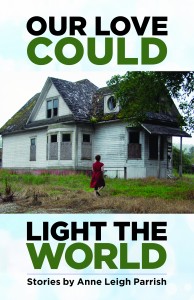 Anne Leigh Parrish’s new story collection, Our Love Could Light The World, will be available June 3, 2013 from She Writes Press.

You know the Dugans.  They’re that scrappy bunch down the street.  Their yard is overgrown, they don’t pick up after their dog.  The father hasn’t earned a cent in years.  The wife holds them together on her income alone.  Their five children run free, leaving chaos in their wake.  You wouldn’t want them for neighbors, but from a distance, they’re quite entertaining.

Of course, alcohol is an issue.  You can tell from the empty bottles lying under the bush out front.  You can hardly blame the wife for leaving one day.  Without her at the helm, the rest carry on the best they can.

Their strong sense of family keeps them going.  They help each other, and in some cases, rescue each other.  They struggle for a better life.  While they never follow the rules, or completely conquer adversity, they stare it down, meet their challenges, and earn some much needed respect.   They might even make you proud.

Set in the Finger Lakes region of upstate  New York, the twelve linked stories in Our Love Could Light The World depict a dysfunctional family that’s messy and rude, cruel and kind, and loyal to the end.