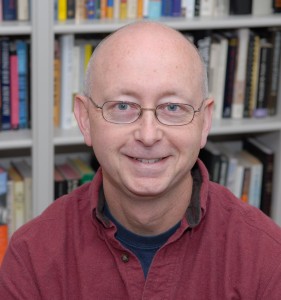 Today I’m chatting with Cliff Garstang, author of In An Uncharted Country (Press 53, 2010) and What The Zhang Boys Know (Press 53, 2012).  As you’ll read, Cliff is both very interesting and highly accomplished.  He and I have crossed paths a few times in the last few years.  First, Cliff did me the honor of publishing my short story, “The Fall” in the online literary magazine he edits, Prime Number.  Next, in 2011 I joined the Press 53 family of authors when my story collection, All The Roads That Lead From Home was published.  Lastly, Cliff is the proud owner of a chocolate Labrador retriever, Bhikku.  Mine is a black Lab who goes by Zipper.

ALP: Your most recently published book, What the Zhang Boys Know, is a novel-in-stories.  Can you talk a bit about that particular form and how it differs from a novel, or a short story collection?

CG: I think most people are familiar with story collections and novels. On the one hand you’ve got collections like the books of, say, Alice Munro—a compilation of stories that don’t have much to tie them together except that they’re by the same author. And on the other hand you’ve got the novel, which is a more expansive mode of story-telling. Somewhere between them lie the linked story collection and the novel in stories. My first book, In an Uncharted Country, was a linked story collection. The stories were set in the same small town, had some thematic connections, and also had overlapping characters. What the Zhang Boys Know takes that a step further. In addition to those linkages (the setting is the condo building where all the characters live), the stories taken together have a single arc that connects them, even though each story is also independent and stands alone. Probably the first modern example of the form is Sherwood Anderson’s Winesburg, Ohio.

ALP: I see that you hold a number of advanced degrees, including an MFA.  If you don’t mind, talk about your various degrees, how much work went into getting each, and how they ultimately fed (or distracted you from) your career as a fiction writer.

CG: Long story! I wanted to write fiction from an early age and that’s what I wanted to prepare for in college. I wasn’t too aware of creative writing classes, though, although I took a couple of them as an undergrad, mostly because I chose to major in philosophy at Northwestern University, which I thought was good preparation for literary work. (I was right, but maybe for the wrong reasons.) When I graduated, having not taken too many English classes, I realized that I hadn’t read enough, so I decided to go to grad school in English. At the time, I don’t think I’d heard of MFA programs, and there weren’t too many of them, anyway, so I landed in an MA program at Indiana University studying literature. Good move, I think, in the long run, but it turned out that I needed a break from school, so when I got an offer to join the Peace Corps, I did that. This was a very influential two years (I served in South Korea when it was still a poor country), and when I came back I was hooked on international work. I finished my MA, but put the writing on hold while I pursued this new notion. I went to law school then, also at Indiana, because I thought that would be my entrée to international work. Thus began a two-decade long distraction in law. On the one hand, my legal career deterred me from doing any writing. On the other, I lived and traveled abroad and did some fascinating work, so I believe I was filling the well for future writing. Somewhere in there I transitioned from private law practice to public law by going to Harvard’s Kennedy School of Government to study International Development, and I got a Master of Public Administration degree there. That switch taught me a great deal about the world, about working in teams, and about networking, all of which are useful now in my writing career oddly enough. But the immediate destination after that round of schooling was the World Bank, where I then worked for several years. More interesting work, more fodder for the fiction grist mill (to thoroughly mix my metaphors). At the turn of the new century, however, I decided it was finally time to pursue my original dream and to start writing. So I quit my job and went back to school again, earning an MFA. Phew. That sounds like a lot of school. I still take classes from time to time, mostly in languages.

ALP:  You not only write, you edit Prime Number Magazine.  How long as the magazine been around?  What are some of the challenges in editing a magazine?  What are the rewards?  Also, how does your work as an editor mesh with your own writing?

CG: I founded the magazine with Press 53 Publisher Kevin Watson in the fall of 2009 while we were promoting my first book, and the first issue came out in July of 2010, so we’ve just finished four full years of publishing. One of the biggest challenges is finding good work to publish. We have a staff of 5 editors and we publish fiction, nonfiction, poetry, and reviews, plus interviews and sometimes things like craft essays or drama. But we occasionally have to really beat the bushes and solicit work because we don’t get enough of high quality work. (Hint, hint, to anyone reading this!) That’s especially true in nonfiction, so we’ve been trying to get the word out more about what we do. Rewards? I’ve gotten to know a lot of great people through the magazine—editors and writers, both. As for meshing with my own writing, I try to set aside a specific time each week to work on the magazine, so it doesn’t interfere with the rest of my life. That’s the goal, anyway.

ALP: You’re putting together an anthology called Everywhere Stories.  Talk about that project a bit, if you would.  What inspired it?  How is the process coming along?

CG: Everywhere Stories: Short Fiction from a Small Planet was inspired by own international interests. I like reading and writing about the whole world, so I thought other people would too. I put out a call for submissions in the late summer last year and by the deadline of December 31 I had 650 submissions. Overwhelming. Working through those submissions was a full time job for a few months, but eventually I selected 20 stories by 20 authors set in 20 countries. And in the process of selecting, a theme emerged—“It’s a dangerous world.” The editing is now all done, the cover designed, and Press 53 tells me we’ll have advance reading copies pretty soon for reviewers. The official publication date is October 1. If the book does well, the publisher may let us turn it into a series, which I think would be great.

ALP: In your opinion, what is the value in attending residencies or writers retreats?  Is it networking with other writers?  Or having dedicated time to work on your writing?

CG: For networking I recommend conferences like Sewanee, Bread Loaf, Tin House, and the like. Residencies are all about the work, for me. I just came home from one and I didn’t really see the other residents all that much (except for dinner four times a week). I spent my time either in my writing studio working—I was pleased with my productivity there—or I was taking long hikes in the woods that surrounded the property—and that was writing too, you know, in the way that it helps clear the mind and resolve problems that you’re having on the page. Having said that, I’ve met people at residencies who are now friends and connections, so there is some networking that goes on.

ALP: Do you teach any writing courses?  If so, where?

CG: I have taught, but I’ve been limiting that lately to focus on writing. I do like teaching at short residencies or at conferences, though, and I’m interested in doing more of that. It’s less of a time commitment and can be very stimulating for both teacher and student.

ALP: There’s been so much talk in the last few years about the rise and relative success of self-publishing.  What’s your opinion on self-publishing?  Are the traditional gatekeepers like literary agents bound for extinction?  Is self-publishing something you would ever consider for your own work?

CG: I think self-publishing is wonderful for some people and some projects. And it’s easier than ever to do it, either in paperback or digital versions. That’s good for readers and writers both. However, and this is a huge however, I think many writers rush to self-publish before they have exhausted their options in the traditional publishing world. As a result, too, many self-published projects are poorly edited and contain sloppy writing and errors in punctuation and grammar. Plus, while there are exceptions, most self-published work will have a limited reach. Better to be patient, work with an agent and/or an editor, and establish your career for the long haul.

ALP: Did you always want to be a writer?  While you were working as a lawyer, did you write on the side?  A lot of writers have full-time jobs and careers that compete with their writing time.  What do you think their biggest challenge is, other than finding enough hours in the day?

CG: Yes, I always wanted to write, and I did begin to dabble in writing at one point in my legal career, or at least taking notes about a book I wanted to write. I really admire writers who can juggle jobs and writing, but I found I couldn’t do it. My work in law was never a nine-to-five job, and usually involved a lot of travel, so sustained writing or taking classes in writing was out of the question. Or maybe I’m just making excuses. Many professions absorb 100% of your energy, and that just doesn’t leave anything for writing. It didn’t for me.

ALP: What’s the best way for a writer to get publicity and attention for a new book?  What sorts of things do you do to promote your titles?

CG: Promotion is hard and time consuming. A writer needs to spend a little bit of time every single day doing it so that it won’t overwhelm the real work, which is writing. There are endless ways of getting attention—doing readings in bookstores and, increasingly, outside of bookstores—bars, restaurants, reading series, etc. The blog world may be saturated, but that’s another way to get people to know about your work. Attend conferences, teach at them, apply for fellowships and contests. Always be on the lookout for opportunities. For example, last year I heard about an award that the Indianapolis Public Library Foundation gives each year. My publisher nominated me and we just learned that I’m a finalist. I’ll go to Indianapolis—where I grew up—in October for the awards dinner. That’s going to be great exposure, I expect, win or lose.

ALP: Lastly, what are you working on now?

I finished a book last year that my agent is submitting to publishers now, and I’ve been working on a new novel. It’s unusual, I think. I hope. And that’s about all I can say about it at the moment. Thanks so much for the questions!