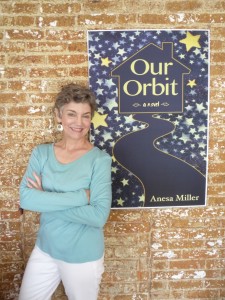 Today I’m chatting with Anesa Miller about her work.

ALP:  You brought out two books within the last year, a collection of essays, To Boldly Go, and a novel, Our Orbit.  For myself, any kind of non-fiction writing has a very different feel from writing fiction.  Do you find that as well?  How do you shift from one mode to another?  Which is more difficult, challenging, or interesting for you?

AM: For most of my writing life, I have switched back and forth among genres. In fact, for quite some time, I was undecided on which should be my main genre, overall. (Now, of course, I’ve settled on tweets as the most important thing to write—lol.) But switching became a problem when I was considering creative writing MFA programs. Many of them don’t permit students to study more than one genre, and some express open contempt for “switch hitters.” They assume you’re not really devoted to anything. But cross training—to borrow another sports metaphor—has served me well. For a few months, I might focus mainly on poetry, then move to finishing a short story, and after that, draft a personal essay. I know this practice is anathema to some writers and not without reason: there’s certainly a risk of fragmenting your attention. But I find I’ve rarely wasted time feeling blocked or stymied when things are going badly on my primary project. I finally determined that long-form fiction would be the genre best suited for my most serious efforts. Of course, that means one can work a long time without the gratification of reaching an end point. So instead of struggling, I would turn to something else, if only for a week or two. Using words in a different way—in a poetic or non-fictional form—helps break up the tendency toward tunnel vision. And bringing a smaller project to completion has often given me enough satisfaction that I can get back to my novel with a new energy for sorting out the problems. Another non-fictional use of writing skills that I’ve pursued is advocacy. When my artistic work has occasionally gotten bogged down, I like to spend some time writing letters for Amnesty International or the Sierra Club. Locally, I’ve gained some notoriety with my letters-to-the-Editor, sounding off on educational issues and environmentalism. It keeps my fingers nimble and taught me to hold down the word count! So non-fiction has always been pretty comfortable for me. Shifting to fiction was the high-risk move.

ALP: Besides writing, what other jobs and/or careers have you had?  How have these other occupations blended with your writing?

AM: For about 15 years I pursued an academic career in Russian Studies. I describe the demise of that effort in “Farewell to Matyora,” a piece in my essay collection, To Boldly Go. When it became obvious that I would never land a decent-paying job in academia, I found the courage to put that career aside and concentrate on writing. But with regards to non-fiction, how I felt at home with that genre, my academic work played a positive role. I understood stylistics. I published translations (mostly of non-fiction work), wrote scholarly articles and book reviews, and—of course—learned a lot about literature and criticism. All of that was great practice.

ALP: Your titles are self-published.  How did you find that particular process?  What went well, and what do you wish could have been done differently?

AM: I wish I had been born one of the fortunate few who understand and embrace the call to write stories from an early age—and who have the extra good luck of convincing someone in the book industry to invest in their work! Instead, I’m doing my best with self-publishing. Why? Because books really are like children in that we feel compelled to give them a decent chance in life, or some kind of chance at the very least. Truth be told, I’d rather let an organization like Norton or Little, Brown help out with the myriad chores involved in producing and selling books. Meanwhile, I try to make the best of the independence that self-publishing affords.

ALP: Let’s talk about the inspiration for your two books.  First, To Boldly Go.  What themes connect the essays, and why did you write them in the first place?

AM: The essays were written at different times and for different purposes, but one thing several of them have in common is that they grew out of my journals. Journaling is another practice that allows me to work on non-fiction styles because I tend to obsess on my daily life and psychological issues, analyzing and describing them to death. I never intend my journals for publication, but sometimes I’ll look back and trace a theme that recurs over time and use some of the language to craft a more organized piece. So I guess various life problems have inspired most of my essays. That said, the themes in my book are a bit larger (I hope): family love and loss, love of nature, the sources of human nature in evolution, the search for meaning in life and in society.

ALP: What is the gist of Our Orbit?  Again, what was the inspiration for the book?

AM: Our Orbit is the third novel I’ve written. The other two were a bit experimental, required a great deal of research, and are still unpublished. So I wanted to focus on an engaging story that would make a book I could sell within the context of my genre, which is literary fiction. I had written a short story that seemed to have potential for expansion. In fact, most of my short stories tend to grow longer and longer, but that’s a different question. The story that became Our Orbit began as a study of opposing beliefs between people of good will, people with a powerful connection to one another. I know that sounds abstract and maybe not terribly interesting, but I concentrated on how to embody the conflict of beliefs in the feelings and concrete actions of characters. So Our Orbit is the story of two families with different views of life. One is religious and conservative; the other secular and liberal. Normally, they would simply avoid contact with one another, but through a series of misfortunes, the youngest child from the religious family becomes the foster daughter in the liberal family. It’s as if two different generations of my ancestors became contemporary families and had to confront one another. The main child character, a half-orphan who loses one of her parents and then the next, presents a version of my own story. It’s heavily fictionalized, not so much to “protect the innocent,” as because the process of creating fiction can leave emotional underpinnings intact while erecting new narrative structures to reveal their significance. Endlessly fascinating—there’s always a mysterious subtext. That’s my take, at any rate, on what we tend to do as fiction writers. And this is a big part of why fiction won out as my favorite genre.