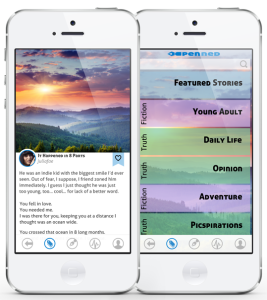 I’ve got a new book coming out in October, my debut novel, What Is Found, What Is Lost. I’ve been working social media like crazy in an effort to build interest and gain exposure. Most of this has been on Twitter, where I’m happy to report I’ve now got over 17,000 followers.

One of these approached me recently and asked if I’d be interested in using a new app called Penned to promote my writing. Sure, I said. Penned currently is limited to use only by iPhones, but is expanding very soon into the Android market. Once they have, I’ll be able (with my ancient Android phone) to upload some of my work and, I hope, gain more interest and exposure.

I agreed to post their promotional blurb here on my blog:

How is that for an alliteration? It’s true! The app, Penned has finally launched into the Android market, and with readership expected to double… the Penned staff is eager to see an influx of talented authors and bloggers join from their Android devices. If you haven’t heard, Penned was founded by Brian Sanders, and with the help of PR specialist, Sonia Chopra, the app is taking off into something bigger than expected.

Oh, you haven’t heard of Penned? 🙂 In that case… It is a fun and interactive way for writers and bloggers to create and share their writing with the literary community.. via the mobile world!  With various novelists and bloggers from all different calibers, walks of life, genres, and success, it has become a way to make one’s voice heard… by what lies in your pocket… Your iPhone or Android! With the feature to edit and add your stories online (after signing up via your cell-phone), you now have the ability to contribute from your computer as well. Speaking of abilities… you are able to add your own genre and category, by simply creating it while posting your story. The featured section is reserved for established authors to preview their upcoming novels, as well as those users who have gotten the most traffic. This could be you…! As great as this all sounds, the real question is…. have you Penned yet?

And there you have it! Another tool for writers to push themselves out into the electronic world and into the hands of readers.