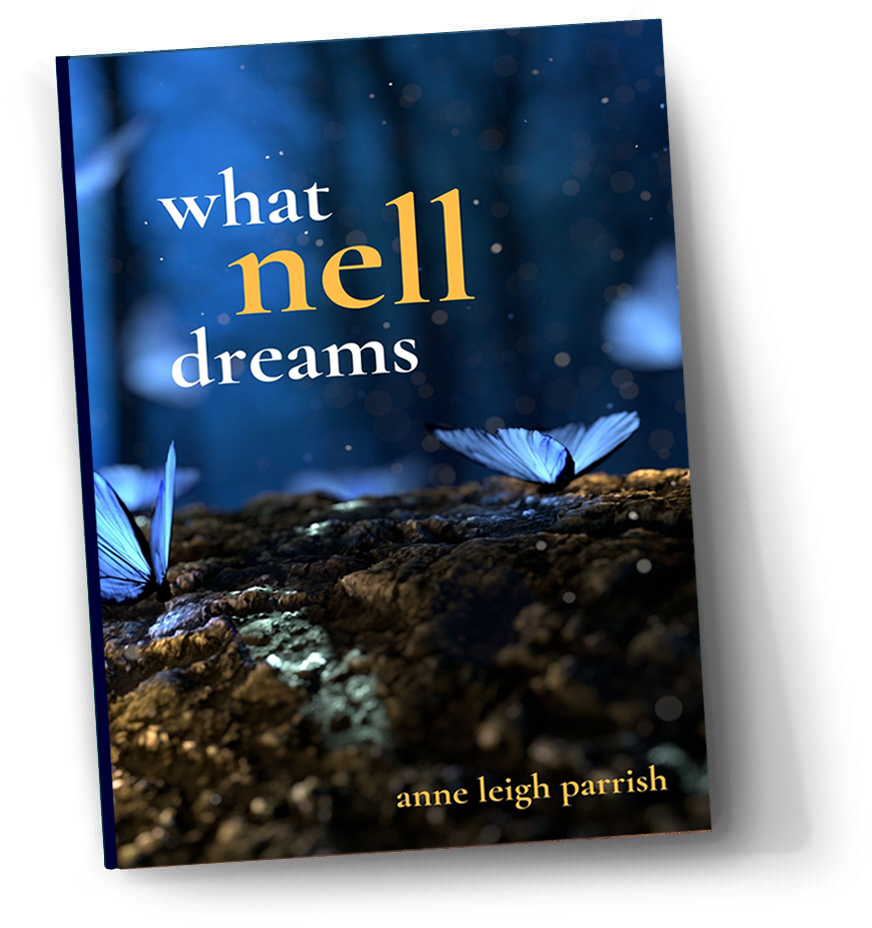 Praise for What Nell Dreams

. . . these tales are also wonderfully worthwhile, courtesy of an indelible voice that leaves a lasting impression. – Kirkus Reviews

In What Nell Dreams, a masterful collection of sixteen short stories and a novella, Anne Leigh Parrish once again paints the lives of ordinary human beings in all of their poignancy, magic and verve. – Jacob M. Appel, author of Einstein’s Beach House

Excerpt from What Nell Dreams

On Monday, it’s about a horse. The eyes are remarkably kind, shy, even flirty under their thick veil of lashes. She looks at Nell from the side, sticking her large soft muzzle over the fence to nudge at her outstretched hand. That hand is empty—no sugar cube, apple, carrot, only the palm lines waiting for the mystic to decipher, dampened with sweat. The horse enjoys the salt of that sweat and licks it all away with one leisurely pass of its velvety tongue. Nell swoons with delight. This is love, she thinks, this.

Tuesday, her sister beats her with a riding crop. Monday’s horse is hers. Nell is forbidden any contact. She is forbidden even to think of her. You are not supposed to be here, the sister says. You are a mistake. The crop is put down, and the sister uses her bare hands instead. When she tires of her abuse, the sister sits, exhausted, pitiable, needing love and attention. She receives none. Nor is she punished for her brutal acts. In Nell’s dream world, she alone is punished.

Wednesday, the man she married fails her. He weeps with regret. His weakness becomes her strength, and she walks with him on her back through waving summer grass. His weight is great, yet lightens as she goes, until she can’t feel him at all, pressing into her, clutching her shoulders and breathing on her neck. She meets a stream that flows joyously over smooth rocks, enhancing their gray color to a rich, dark blue. Nell is stunned by this sudden, unexpected beauty. When she turns her head to say, Look! Won’t you just look at this with me, she finds that he’s no longer there.

Thursday, the child she never had escapes from her womb in a rush of blood. The child is a boy with large blue eyes and a crooked grin. It wears a ring on its thumb engraved with stars. The stars are their point of origin, hers and the child’s, and she removes the ring to wear it herself. She needs the stars to remain close to her, now that her body no longer contains them, but without the starred ring, the child wails painfully, losing its beauty, robbing her of the pleasure it gave her only moments before, so she returns the ring. Now starless, and unmoored, it is she who weeps.

Friday, she makes passionate, almost violent love with a man she’s never met. She can’t see his face, not because it’s hidden, or there is no light, or her eyes are closed, but because she is so swept away by the energy of his almost painful thrusts that anything on which her gaze falls disappears. He continues his mounting rhythm until she has taken him all the way inside her, and there is nothing left of him beyond her. He is her blood, bone, and sinew. His flesh is hers. She wakes, bathed in sweat, with an ache in her teeth.

Saturday, she admires a tapestry hanging on a stone wall in a museum devoted exclusively to Medieval artifacts. She’s amused by her outfit, a white mini-dress and white vinyl boots, in such a somber, dignified place. The image on the tapestry is of a unicorn standing in a circular fence, clearly captured, though the fence is low enough to jump over easily. Maybe it doesn’t want to leave. Maybe it’s humoring its captors, playing along, letting them feel in control. There’s a look of whimsy in its woven eyes. As Nell leans in for a better look, the unicorn whispers, Touch my horn, I beg you. When Nell’s finger brushes the wool, a single thread comes loose. She pulls and pulls, hand over hand, until the tapestry has unraveled into miles of red, gold, and green wool at her feet. She steps out of the pile, awed at her destruction. Thank you, comes a final whisper.

Sunday, flowers in her garden open in winter and snow falls in spring. The midday sky is littered with stars, and the sun burns at midnight. With this flouting of Time’s law, she is cast adrift, excited to the point of giddiness as she rises through the roof, floating over trees and the fields beyond, until the land below is new, dotted with figures tending the earth lovingly, patting soil with such gentle hands she can feel their silky touch. Her flight continues until she knows she is about to lose her way entirely, that if she doesn’t turn back now, she will never see home again. She pauses, hovering between past and future, savoring her freedom, wondering how she lived so long without it.