A novel by Anne Leigh Parrish | Published by Unsolicited Press 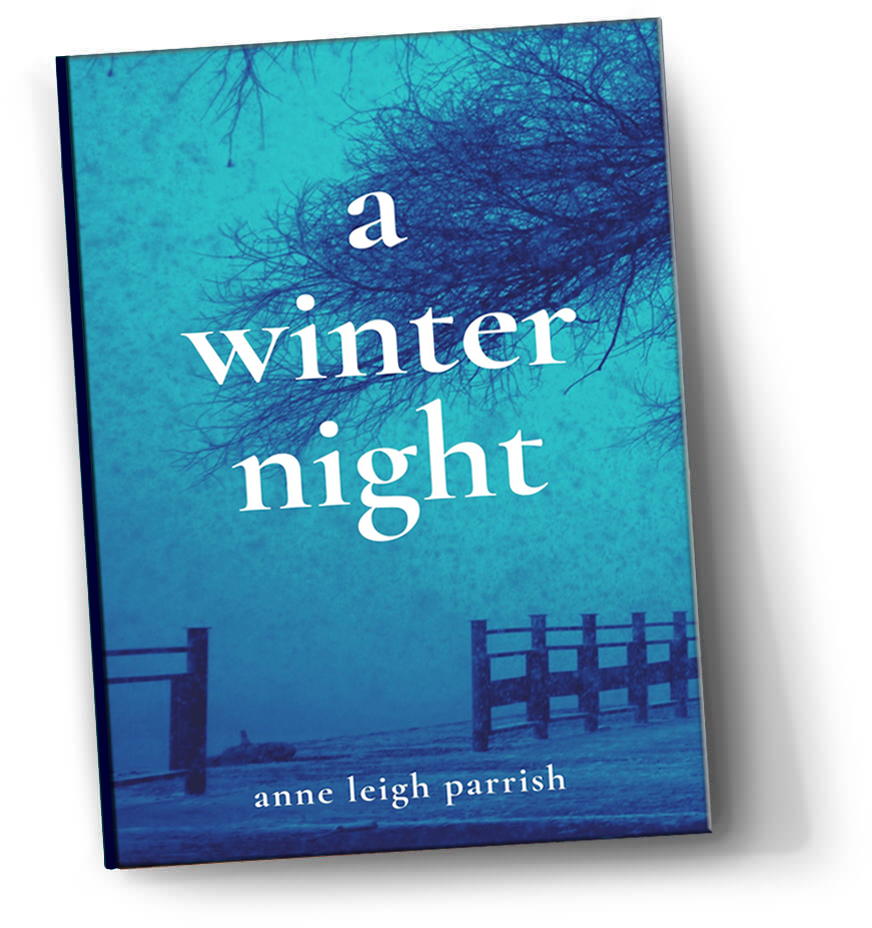 Praise for A Winter Night

Anne Leigh Parrish does it once again. In A Winter Night, she brings her signature wisdom and wit to the world of Angie Dugan, a retirement home social worker who spends her days caring for others while yearning to be cared for herself. A Winter Night is ultimately a poignant and powerful novel that delves deep into the meaning of trust, understanding and forgiveness. – Jacob M. Appel, author of Millard Salter’s Last Day

Excerpt from A Winter Night

A Winter Night – Chapter One

It’s all about family, Angie tells the Greens. An elderly dementia patient can experience significant anxiety on their bad days. Love and support go a long way. The staff at Lindell is wonderful, in fact, they were given an award by the National Alzheimer’s association just last year for their work in memory care. She assures them that their mother will get the best of everything. They’re welcome to walk through the nursing wing, ask questions, and even chat with a couple of residents who still have a good grasp on things. Angie can tell them who fits that description—if they’d like.

Dan Green has the sour look of someone who is about to part with a lot of money—not his money, his mother’s, but he’s managing it for her. Angie assumes it’s a sizable estate. Lorna Green and her husband, Joseph, owned a chain of grocery stores across the Southern Tier, the biggest of which was in Binghamton. Most people at Lindell are retired professors from Dunston University. Some, like Lorna Green, are business owners. It’s a liberal community, solidly Democratic; yet, when asked how many other Jewish residents there are, Angie comes up short.

She returns to the idea of family engagement, and Dan Green says they won’t have a lot of time for that. One daughter is heading off for college; another is getting married; the third is expecting a baby; and their son is pursuing his PhD in Physics at Princeton.

“Well, that’s certainly a beautifully full plate, isn’t it?” Angie asks, her voice light, and full of warmth and love for her fellow man. In fact, she thinks Dan Green’s probably a jerk, not because of his curt manner, but because his wife looks all used up. Angie knows that look. She’s seen it on the faces of her clients before she joined Lindell, when she wanted to use her Master’s in Social Work to save women from the abuse that comes from making bad choices about men. As Dan goes through the paperwork Angie gave him, Debbie Delaney comes to mind with her front teeth knocked out; her right eye swollen shut; a bruise the size of a baseball on her cheek; her two children sitting on the floor, playing with a headless doll and stuffed cat. Debbie went back to her husband when he got released, saying it was her fault; she’d made him mad; she didn’t follow the rules. Angie can’t quite see Dan as a wife-beater, but he’s overbearing and probably selfish in bed.

This thought causes her to flush. She’s sure they’ll notice. Maybe they’ll think she’s having a hot flash. She’s only 34 but might look older. If so, she doesn’t mind. It’s probably an advantage in her line of work. She made the mistake of mentioning this once to her mother, who was appalled. At 55, her mother could pass for ten years younger. Angie wishes she’d inherited her genes. Instead, got her father’s blonde hair and gray eyes; her mother is a brunette. Nor are they built alike. Her mother is petite; Angie’s the complete opposite, and her therapist discourages her to dwell on this. It’s hard on her self-esteem.

Dan Green wants to know how soon his mother can move in. Angie consults the spreadsheet on her computer. There’s a vacancy now; the previous resident passed away just last week; the room just needs a fresh coat of paint.

Her cell phone buzzes on her desk.

“Excuse me just a moment,” Angie says. She looks at the phone. There’s a message from Matt. Why couldn’t he have called her last night, when she was at loose ends and really wanted to hear his voice?

“Too antiseptic. She needs color. Color is very important. It nurtures the soul,” Sophie says.

At this Dan turns a withering gaze on his wife, who meets his eye for just a moment, before looking down at the cards in her lap.

“I couldn’t agree more. Color is crucial. Our paints are very carefully selected to be warm and inviting,” Angie says.

Dan looks crossly at Angie, then returns to the forms he’ll have to fill out for his mother to be admitted.

A few minutes later Angie’s phone buzzes again, and again she takes a quick look. This time it’s a text from her younger brother, Timothy.

“What does this mean, ‘if a resident should decease before the end of any given month, no pro-rated fee for that month will be refunded on his or her behalf?’” Dan asks.

“Well, the rent is due on the first of the month—”

“With a five day grace period.”

“Yes, that’s correct. As I was saying, the rent is due on the first, and if your mother, or any resident, were to pass away any time during that month, you don’t receive a pro-rated refund for the portion of the month the room is not occupied.”

“Mr. Green, I’m sure if you—” Angie stops when her phone buzzes a third time.

“Are we keeping you from something?” Dan asks.

Angie silences the phone and puts it in her desk drawer.

She says the no-refund policy is standard for retirement communities and nursing homes. They’re welcome to explore other options. In fact, she encourages all families of prospective residents to do just that.

She talks about the fitness center, the lecture series, weekly movies, and the art room, describing each in detail. She offers to take them on a tour so they can see for themselves.

“We already looked everything over. It’s nice enough. That won’t make any difference to Mom, though. She doesn’t even know what day it is half the time,” Dan says.

“She’s bound to enjoy pet day. It’s always a real favorite with the memory care patients,” Angie says, then explains this is when a staff member brings in her own dog or cat to visit.

“Well, please make sure you indicate that on the medical history form.”

Dan continues to go through the pages, one by one. Minutes pass. Angie wonders why Matt’s up so early. He doesn’t start work until four. He tends bar downtown, a position that seems to agree with him on a number of levels—he can banter with the best of them, he likes being around people when they’re drinking, and he digs the bands that come and play on the weekends. He was once an aspiring guitarist and will be again as soon as he can lay his hands on a good instrument.

Dan puts the papers he’s been reviewing back in their folder. He looks at Angie.

“Mr. Green, I’m sure your mother will find this a wonderful place to start the next chapter in her life,” she says.

Angie laughs. She searches for something flattering to say and can’t think of anything.

“Your mother and I have been close for years. You know that. I think I know what she’d want if she were—”

“In her right mind?”

“Fully in possession of herself,” Angie says.

Dan pulls out his checkbook with a heavy sigh. Angie explains that he needs to go to the Ombudsman’s Office to sign the financial agreement and remit payment. He stands, checkbook still in hand, turns and leaves her office. Sophie gives Angie back the paint cards, then extends her hand. Angie shakes it. Her palm is clammy and nasty to touch. Angie has held many nasty hands in this business—sticky, bloody, callused, fever-hot, ice-cold, even one with three broken fingers. Sometimes the physical aspect of being a social worker is the worst of all.

Alone, Angie pulls out her phone and listens to Matt’s message.

“Hey, it’s my day off. You wanna get together for a drink? Call me.”

Did he tell her before that he was off today? She can’t remember.

Timothy’s text says Matt was over at their place last night and made a crack about Sam’s weight. Sam is Timothy’s girlfriend. She’s also friends with Angie. They met at Lindell before Sam quit to go back to school. Timothy and Matt have been friends for a while, which makes Matt insulting Sam all the more disturbing.

The second text is from Sam saying she knows Timothy already texted her about what Matt said, and that really, she’s not upset about it.

Why didn’t anyone get ahold of her yesterday—Sunday? And if Sam and Timothy invited Matt over, why didn’t they have her, too? She thinks Matt probably went over to watch the game, Sam was probably on campus studying, came home, and they rolled into dinner without it being any kind of formal thing.

What the hell got into Matt, anyway? Angie carries a little too much weight herself. Does he think she’s fat?

They’ve been seeing each other regularly for about a month and a half. They haven’t slept together, though she wants to, very much, and he seems to want to as well, but they just can’t manage it. They kiss great, they turn each other on, but then some chill seems to settle on them. As if they each secretly think that taking off their clothes and getting into bed is a very bad idea. For Angie’s part, not liking her body makes it hard to let someone else touch it. She also assumes that when Matt imagines her undressed, he can’t summon the necessary enthusiasm to lie naked against her.

But maybe she’s read him wrong. Maybe he’s as eager as she is.

She texts him back. Sure, when and where?

She calls Timothy. He’s on his way to work. He says he just wanted to give her a heads up about what happened because she seems so into the guy. She asks him if he thinks she’s making a mistake.

“Beats me. I mean, he’s usually fine, but this was out of line.”

“Are you guys still friends?”

“Yeah, but he needs to chill out and apologize.”

She calls Sam who reiterates that it’s no big deal. Matt was just in a weird mood. Angie wants to know what he said, exactly.

“That there’s so much of me to love.”

“I don’t know about that. I just don’t care what Matt thinks.”

Sam has a point. Matt is Angie’s boyfriend, not Sam’s. Timothy adores Sam, and that’s what matters, right?

When they hang up, Angie registers that Matt still hasn’t gotten back to her.

What if he’s really just another flaky, insensitive idiot? It wouldn’t be a surprise, would it, given the kind of man she always attracts?

She refuses to give in to negative thinking. She’s going to stay open, see where this thing with him might go, and push past the barriers between them—and within herself—to find happiness.

Assuming it even works that way